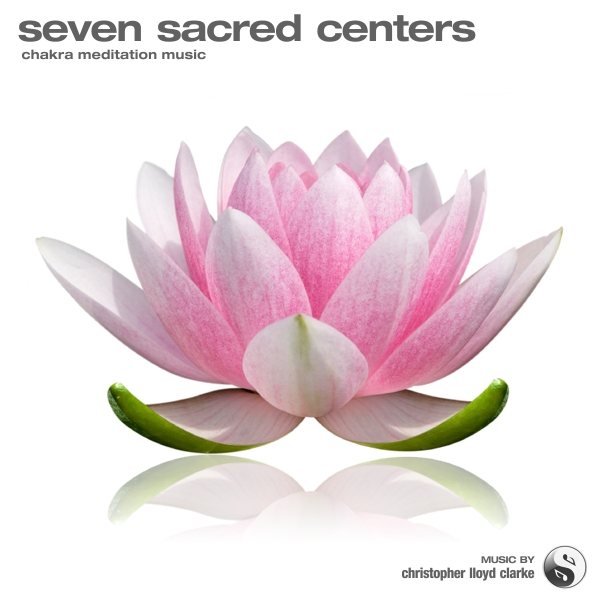 An exclusive collection of chakra music of unsurpassed creative depth and production quality that has become one of Christopher Lloyd Clarke's most acclaimed works. These soothing tracks will relax, purify and enliven the energy centers of your body. They are perfect for creating guided chakra meditations and are a wonderful complement to natural therapy treatments. The complete album includes 7 tracks of royalty free chakra music and is 65% cheaper than the price of purchasing tracks individually.

Please allow me to walk you through the seven tracks I composed for Seven Sacred Centers and some of the ways the music may be used.

Earth's Embrace
Root chakra - Song composed in the key of C
Tribal percussion, ethnic instruments and deep, warm tones are blended together in this soulful composition that is both grounding and soothing at the same time. This gentle music will activate the base chakra, while preparing the physical body for deep relaxation.

The Joy Of Creation
Sacral Chakra - Song composed in the key of D
As we move up from the base chakra, the music of the sacral chakra becomes more emotional and more fluid. This composition awakens and purifies the sacral chakra while engendering feelings of openness, warmth and connectedness towards others.

Shine
Solar Plexus Chakra - song composed in the key of E
The music of the solar plexus chakra has a brightness to it that invokes images of sunshine and inner radiance. You will notice that the music is very calm, but it is also very "alive" and energizing. This empowering composition is wonderful for awakening and cleansing the solar plexus chakra.

Divine Love
Heart Chakra - Song composed in the key of F
I like to think that this heart chakra meditation music speaks for itself. This is music of love and compassion, pure and simple.

The Free Air
Throat Chakra - Song composed in the key of G
Visualize yourself drifting across a clear blue sky, floating like a cloud on the breeze. You are breathing cool, sparkling air deep into your lungs. These are the images that come into my mind when I listen to this throat chakra music. Openness, freedom of self expression and lightness of being are encouraged by this tranquil composition.

Deepest Mind
Third Eye Chakra - Song composed in the key of A
This mystical soundscape does not adhere to any of the “rules” that might govern traditional music composition. Intentionally unstructured – this dreamy, meditative music opens the third eye chakra and frees the listener to explore their imagination, their intuition and the deeper aspects of their mind.

The Ascension
Crown Chakra - Song composed in the key of B
Heavenly and sweet, the music of the crown chakra opens one up to the timeless, limitless nature of pure awareness. As the music unfolds, melodic bells gradually give way to a wash of celestial choirs and shimmering chimes that uplift and inspire the listener to an elevated state of consciousness.

The versatility of Seven Sacred Centers

The music of Seven Sacred Centers was originally designed to complement chakra meditations, but these tracks are so versatile they can be used for many different purposes. They are often used to enhance natural therapy treatments, to create YouTube videos, in software applications or as a backdrop to almost any kind of guided meditation journey.

The music of Seven Sacred Centers are all discrete tracks that fade in at the start and out at the end. In other words, they are not loops. However in the hands of an audio editor with some basic skills, each track can be quite easily looped. These tracks all contain some chorous/verse repetition so it is possible to link up these sections to extend the duration of the music if need be.